What has the “Anatomy of the Hip Joint” got to do with Louis XIV?

Author: Maggie Lorraine on behalf of the IADMS Education Committee

Classical Ballet is a dynamic art form. The art of ballet has undergone change since its birth in the mid-17th to early 18th Century. It is interesting to review the description of the organization of the body, codified by Pierre Beauchamp (1631-1705). The five positions of the feet are described as turned out from the hip to an angle of 45 degrees. It was emphasized that the feet should never be turned out more than 45 degrees.

Over time, there has developed an expectation for Ballet dancers to turnout each foot to 90 degrees creating a 180 degree shape with the feet. By studying human anatomy it appears that Beauchamp was more anatomically sound in his recommendation of the 45 degree turn out “from the hip” than the current 180 degree placement “of the feet” that we now often see. There are many anatomical factors contributing to the effective use of turn out.

The Bone Anatomy of the Pelvis
The pelvis is formed from the fusion of three bones: ilium, pubis, and ischium. Each of the three bones contributes to the hip socket or acetabulum. 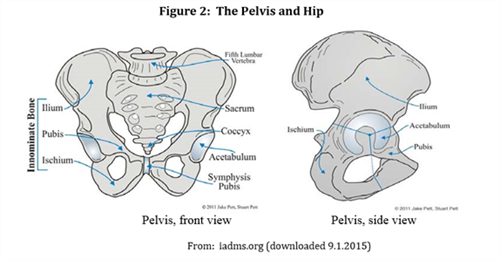 The Ball and Socket
The hip joint includes two main parts, the ball and socket. The ball of the hip joint consists of the round head of the femur or thigh bone and the femur articulates with the hip joint to enable the leg to rotate outwards.
There are three factors that affect turnout from the bony structure of the hip joint and most researchers agree that these conditions cannot be altered with training:
1. Angle of femoral anteversion On average, the neck of the femur is angled 15 degrees forward relative to the shaft of the femur (see Figure 3A). An increase in this anterior angulation, called anteversion, often will cause someone to toe in when they walk, (see Figure 3B). People who are born with more anteversion, the orientation of the femoral shaft in the hip socket makes the knees face towards each other when standing or walking. In ballet class, when they turn out their legs from the hip, the knees face the front, leaving little additional hip rotation to create the expected angle of outward rotation visible at the feet. However, a decrease in this angulation, called retroversion, will allow one to have greater turnout (see Figure 3C). People born with retroversion have a much easier time with turnout. Just standing in neutral, the knees and feet tend to face outward. By adding external rotation at the hip, they can achieve a larger angle of outward rotation visible at the feet than the average person. 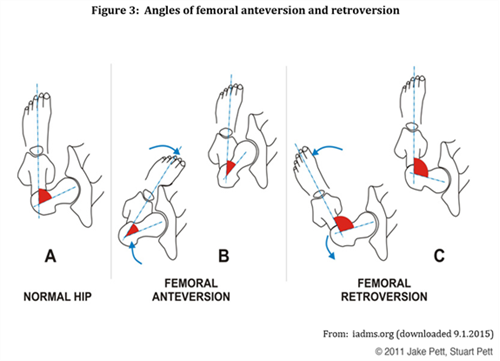 2. Orientation of the acetabulum The socket of the hip faces out to the side and somewhat forward. The socket that tends to face more directly to the side with a less forward facing will allow a greater amount of turnout to come from the hip therefore greater movement range.
3. Shape of the femoral neck The neck of the femur is subject to some variability. A longer and more concave neck allows a greater range of motion at the hip and is therefore considered to be advantageous. A shorter and less concave neck will have the opposite effect and limit turnout resulting in less movement range.

Bearing these anatomical differences in mind, it is more important to encourage dancers to use the turnout they have, rather than working against their anatomical make-up to achieve an unrealistic position. Louis XIV was happy with 45 degrees, we can safely move beyond that if we apply a good understanding of anatomical structure and function.

A great tutorial on hip function in squats with additional images on bone structure, which may govern why people may need to approach movement in different ways:
De Bell R. The Best Kept Secret: Why People Have to Squat Differently, 2015. Watch it HERE